Plum and Cherry Upside Down Cake 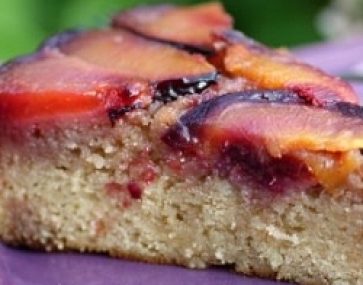 A delicious and Versatile cake. Substitute the plums and cherries for any seasonal fruit.

Preheat oven to 170C. Melt 75gm butter in a saucepan over medium heat, add brown sugar, stir occasionally until dissolved (3-4 minutes). Spread in base of a buttered 22cm x 32cm cake tin, arrange plums in slightly overlapping slices with the cherries in the gaps between the plums.

Combine flour, polenta, baking powder and ½ tsp salt in a large bowl and set aside. Combine milk and vanilla in a separate bowl and set aside. Beat remaining butter and 330gm sugar in an electric mixer until pale and fluffy (4-5 minutes). Add egg yolks one at a time, beating well after each addition. Mixing on low speed, add one-third of the flour mixture then half the milk mixture and mix to just combine. Add remaining flour mixture, then remaining milk mixture, mix to just combine, then transfer to a large bowl.

Fold half the eggwhite mixture into batter, then fold in remaining eggwhite mixture. Spoon into cake tin over fruit, spreading evenly. Bake until cake is golden and centre springs back when lightly pressed (50 minutes-1 hour), cool in tin (10 minutes).

Using a palette knife go around sides of tin to loosen cake. Place a serving platter on top, carefully invert and gently shake tin to release cake.
Serve with icecream, yoghurt or custard.

To welcome you we are offering 25% off your first order*.

Just use code  "welcome25" at checkout.