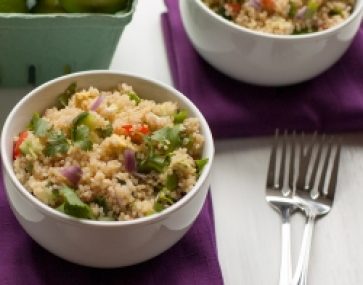 I want to both love and hate quinoa. Love because I am a sucker for any health fad and hate because I hate myself for being a sucker and seriously quinoa you are not in the same league as rice, pasta or potatoes! That being said I do like this salad, delicious with a roast or by itself if being extra virtuous, riff on this salad by adding different vegetables or nuts, or adding rocket instead of beans. Most quinoa is imported and there a serious environmental concerns about the impact of quinoa farming  on the forests of South and Central America where most quinoa is grown try to use Australian quinoa such a Mount Zero (sold at Wiffens.)

3 handfuls green beans top, tailed and halved and boiled or steamed until tender

Juice of half a lemon

Handful of herbs such as parsley, basil, mint or chives chopped.

Handful of cheese such as goats cheese or good quality feta or 1 pack haloumi (we like the Aphrodite brand sold at Wiffens) fried  until golden (don”t fry in oil as cheese becomes rubbery).

Add red onion to a large bowl then add olive, lemon juice,  vinegar a pinch of sugar and salt and pepper to taste.