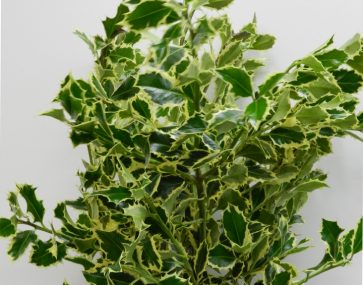 The berries of holly are toxic but in the past it has been used medicinally as it a durietic that relieves fever. Holly can live up to 500 years.

Holly or European holly is also called Christmas or Mexican holly. It It is a dioecious tree or shrub found, for example, in shady areas of forests. Although usually found as a shrub as a tree it can reach 10m in height. It has great ecological value because it is a rugged pioneer species that preserves and enriches the soil. It is of great value to birds and other fauna, including invertebrates that feed on their fruits and disperse their seeds. There are a number of types of European holly with different coloured leaves, from dark green to yellow and green. The tree fruits in winter contributing to its association with Christmas in Europe.

Avoid holly with yellowing leaves or stored in smelly water. Cut a minimum of 2cm off the stem, strip the bottom leaves off, and put in cold water with a flower preservative.