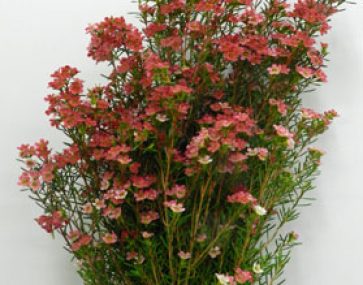 Chamelaucium, called waxflower because of the waxy nature of the flowers, is a genus of shrubs native to South Western Australia. They belong to the myrtle family Myrtaceae and have flowers similiar to those of the tea-trees (Leptospermum). The most well-known species is the Geraldton Wax, Chamelaucium uncinatum, which is cultivated widely for its large attractive flowers. Waxflowers are popular in Australia and are also grown commercially in the US and Isreal.

Fourteen species are currently recognised within the genus. It gives its name to a number of closely related genera, collectively known as the Chamelaucium alliance within the family Myrtaceae. Waxflowers have many flowers per branch, flowers can have a lemony scent. The flowers are small and have five petals, ten stamens, and are followed by small hardened fruit. The central cup of the flower fills with nectar which is attractive to many species of birds and bees. The leaves are tiny to medium-sized and arranged oppositely on the stems. They contain oil glands and are aromatic,often giving off a pleasant aroma when crushed.. The most commonly available colours are pink, white and purple, with different colours indicating different varieties.

Choose bunches where approximately ½ of the flowers are open and unmarked. Avoid bunches where there is significant leaf or flower drop as this is a sign of ethylene damage.